Recently, I figured to rework some part of it to be able to deal better with certain kind of failures, while at the same time still being able to offer all the automation abilities as before.

First, let’s recap the architecture that was already in place: 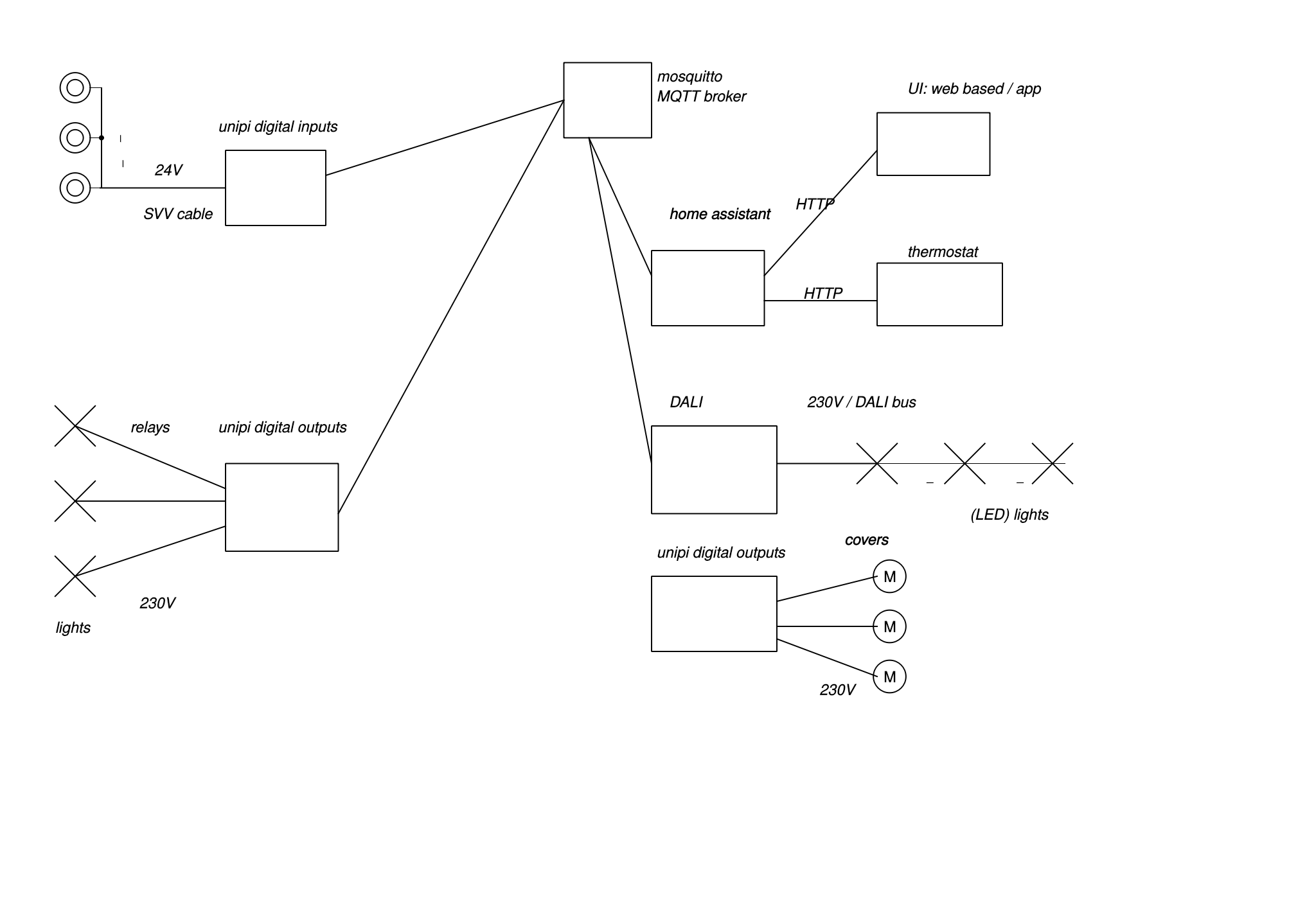 Although this approach has worked fairly well for me, it inherently holds some potential issues.

Firstly, on the software level, all connections need to run through home assistant and the MQTT broker. An advantage of this is that everything is configurable from a centralized place, in software. However, this also requires a higher level of reliability on those software instances. As an example, initially, doing any updates to this software component was a bit more involved since any downtime here, effectively translated into non-functioning light push buttons. Downtime is fortunately a lot less common since I did start using k3s for orchestrating the deployment. Nevertheless, it is (currently) not possible to run home assistant in an “high availability” (HA) mode. HA mode means that multiple home assistant instances can run at the same time, where one instance sits idle as a fail-over for the main running instance.

In addition, on the network level, the links between the components all depend on the local network. Any downtime at this level of the stack again translates into the non-availability of my light push buttons.

This solution would need to be more robust against issues on both software and network layers. At the same time, I would still like to keep centralized control from home assistant.

I did start digging around and got some helpful feedback on the unipi forum from this post on connecting 2 unipi units together.

The first issue of the dependency on the home assistant instance could be mitigated by moving the automation logic out of home assistant. This would mean that some other component could listen to the input events and do the required actions on the outputs. The unipi units could easily run such extra software themselves.

The second issue related to the network layer could be solved by finding a way to connect to the involved unipi units directly together. This post on unipi connections provided some inspiration in that respect: the third option details using the RS-485 bus which is available on most unipi units to connect devices together.

Control from home assistant will still be possible: either the update should come from the toggle of an input button (via the direct connection) or from an MQTT event. There should be no issue in having both options at the same time.1

The new architecture now changes into the following: 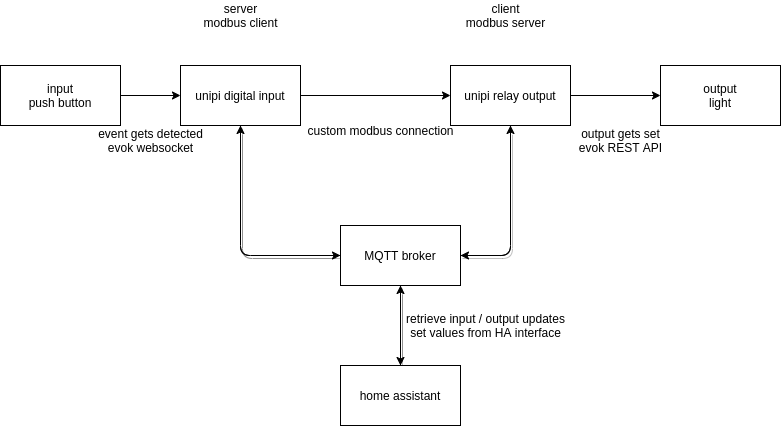 The key difference over the previous architecture is that the link between the input push buttons and the output relays is no longer established using an automation in home assistant. Instead, there is a direct link over RS-485 using the Modbus protocol.

The following image (taken from the post on unipi connections) shows a conceptual wiring diagram to connect one or more unipi units together. Essentially, it is a 2-wire connection, daisy-chaining all units.

As the photo shows, the wiring I did use was a simple piece of leftover CAT6 UTP (the grey piece of cable behind the black ethernet connector in the front). In fact, I only did use 2 of the 8 wires. 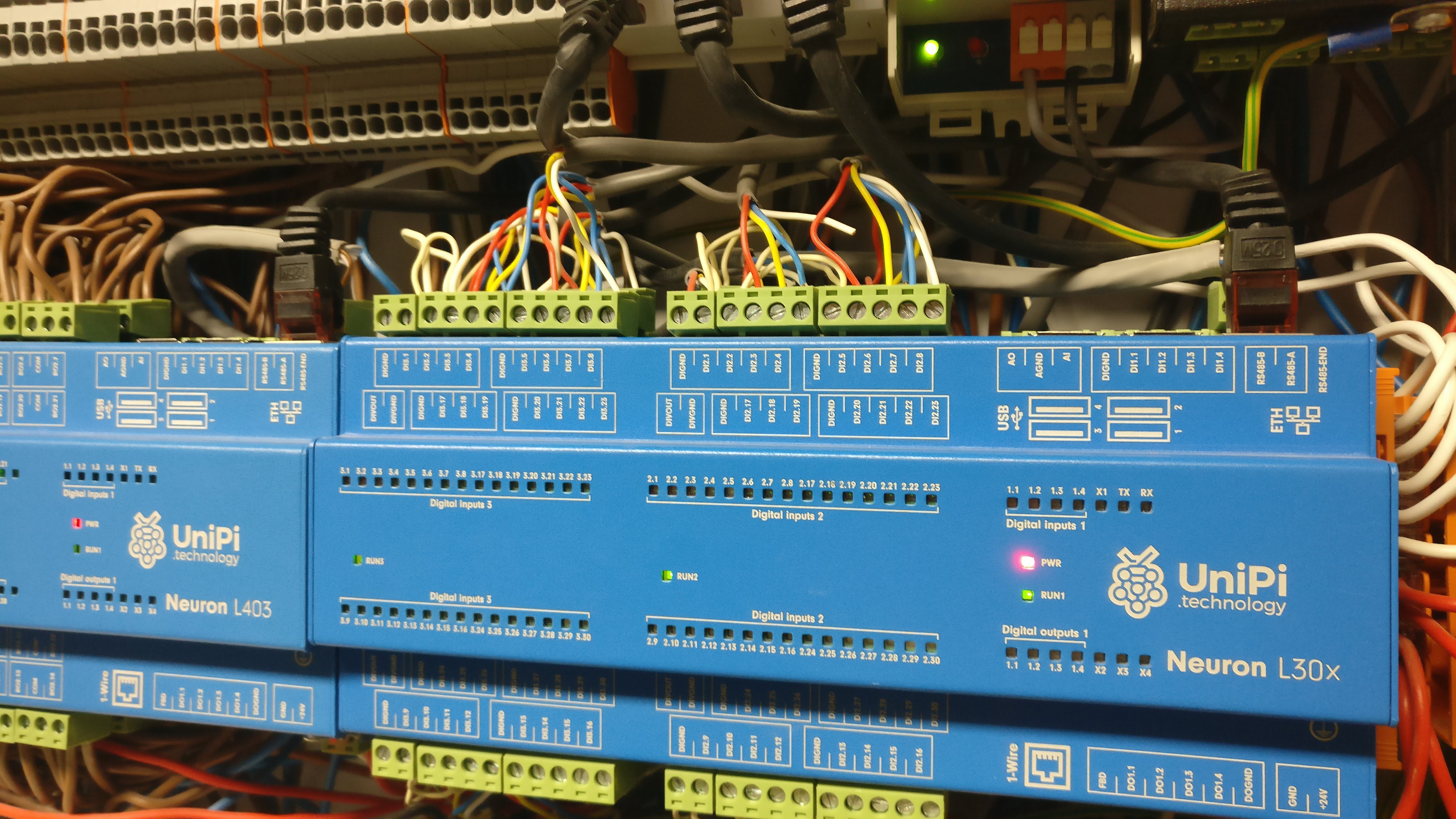 For my purposes I only did connect 2 units together, but you could in principle extend this over to multiple clients on the same bus. This would practically mean extending the 2-wire connection from the last connection on.

I did not need to introduce any additional resistors nor change any of the DIP switches, this all worked fine out of the box.

As the unipi units readily expose the RS-485 interface, this step turned out to be really simple.

The protocol you would typically run on this wiring setup is Modbus. Within Modbus, there is one server and all the other clients are daisy-chained on the same bus. All clients provide their own set of inputs and outputs (“coils”, “discrete inputs”, “input registers” and “holding registers”) in a predefined range. Read and write control is fully managed by the server. To read specific values, the server will just poll those values from the client. To write updates, the server can similarly just put the values where they need to be on the clients. The speed at which updates from a client are propagated thus also depend on the polling speed the server uses. In case any communications needs to occur between clients, this is only possible from the server. The server would then first read those values from one client (by polling) and later on write them to the other client.

The unipi OS exposes the RS-485 connection via a specific linux device; see the unipi serial port map. For my neuron L403 and L303 I would need to use the /dev/ttyNS0 devices.

Running a Modbus protocol stack on both the client and server devices was however not provided by default by unipi. Here I did write my own small script modbusbackup.py, which can run both in client and server mode.

The implementation itself is based on PyModbus, which makes it possible to easily write both client and server code.

For now, I only implemented this connection between my unipi unit that reads my push buttons and the unipi unit that controls relays connected to lights. To illustrate, let’s again go through toggling a light:

The key function is ws_process:

The function takes a payload from a websocket event, made available through evok. The reason we use a websocket event here is that it is easier to check any updates from the inputs as opposed to polling ourselves. Additionally, evok already exposes the events using websockets. This is part is quite close to the earlier solution presented in the software post.

See this link for the full client code.

The key to get this to work for me was having a Modbus instance being able to accept incoming messages and handling those directly, i.e. in an event-based way. After digging through some PyModbus examples, I did find this callback server example. I did end up with the following set of functions, definitions:

The _run_server code wraps starting up a serial, RTU, Modbus server. The port to be provided to the server is simple the Linux device mentioned above, /dev/ttyNS0. As part of a Modbus server configuration, you need to provide the outline of the various Modbus addresses it exposes for the main Modbus instance to poll. In this, case I did pass in a custom block, the CallbackDataBlock.

The CallbackDataBlock constructor sets up all required addresses based on the configuration (through the _relay_map function). The _relay_map function keeps a (singleton) mapping of the relays for the given Modbus address. In order to have callback-like handlers, you can override the setValues method. This method is called for any Modbus message for the address that is part of the function arguments. At this point, I do have the message handled by another _trigger function.

The _trigger function simply takes in the Modbus message and maps it again to a relay on the unipi output device. For the purposes of light control, a simple toggle is enough, so the value is just used to see if the incoming event is actually for a rising edge, i.e. a True value. The current value is read first using evok; the new value is the toggled value (by XOR).

Refer to this section for the full server code.

The automation part previously handled by home assistant now effectively becomes part of this configuration file. The link between input and output is done by the unique index field. The input-side will map its digital input change to the index; this index is used as Modbus address. On the other end, the output-side will map the incoming Modbus address to the its relay it needs to change.

This also means that this configuration file needs to be shared between both the input and output side.

To get there, I made changes on 2 levels. On the hardware-side, I did make use of the already existing RS-485 connection, removing any network-related issues. On the software-side, I did add a custom script to run on both the input and output side that essentially notifies the output-side of any input-related events. The actual link between the input and output is through a simple configuration file, shared by both sides.

I only did implement this connection for my lighting setup since I did feel this is the most critical part for me to continue to keep on functioning. For my alarm setup and my shades, all input and outputs are actually each on their own, same unipi unit. This means that in order to decouple those from home assistant I could also write some custom code, but they would not need the whole RS-485 connection, nor any Modbus setup.

Note that some push button-to-light connections still go through home assistant: I have e.g. some Philips Hue lights that get triggered via a push button change. For this case, I think it still makes sense to keep this connection in home assistant. However, once I would start to expand my DALI-bus based setup, I’m not yet sure how to tackle this.

The transition between the fully home assistant-based outline and my current “modbusbackup” solution has gone pretty well though, to that extent that it’s not really clear to others in my home what I have actually been working on. The main advantage I now see is being able to more easily make any changes on the home assistant / network side.